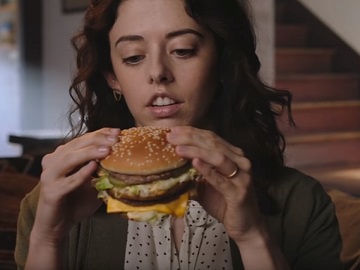 McDonald’s urges people, in a new commercial, to rediscover their love for the Big Mac and its special sauce, and try the Mac Jr. and Grand Big Mac, which will be available at participating locations for a limited time only.

Mac Jr. and Grand Big Mac, the smaller and larger versions of the legendary Big Mac, are made from “100% pure beef patties”, Mac Sauce, shredded crisp lettuce, American cheese, pickles, and onions on a sesame seed bun. The differences also lie in the fact that the Mac Jr. comes with a single patty and no middle bun and the Grand Mac has two patties that weigh around one-third of a pound prior to cooking and a third slice of bread that separates the patties.