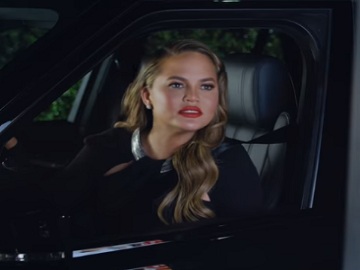 McDonald’s has just released a new commercial, starring Chrissy Teigen, to promote the new $1 $2 $3 Dollar Menu, which enables customers to choose from McDonald’s favorites like the Cheeseburger or McChicken for only one, two or three dollars.

The 30-second spot features the 32-year-old model at a McDonald’s drive-thru ordering a “They never feed you at those things” meal after having attended an awards show, where she received a gift bag full of expensive items, like headphones and earrings, but with anything to eat. “So you said five cheeseburgers and five McChicken for a dollar each?” – the cashier says while handing over the meal.

The next shot features Chrissy back in the audience at the respective event, sharing the cheeseburgers and asking what she missed. “Absolutely nothing.” – her partner answers.

The commercial, which debuted during the Golden Globes telecast, ends with the voiceover urging viewers to create any meal they want with favorites on McDonald’s $1 $2 $3 Dollar Menu.

The $1 items are the Cheesburger, McChicken, Sausage Burrito, and any size soft drink, the $2 items are the Buttermilk Crispy Tenders (2 pieces), Bacon McDouble, Sausage McGriddles, and small McCafé ($2 Small McCafé excludes hot and iced coffee), and the $3 items are the new Classic Chicken Sandwich, the Triple Cheeseburger, Sausage McMuffin with Egg, and Happy Meal.

Chrissy Teigen, the wife of pop singer John Legend, has collaborated with several brands over the course of time, serving as ambassador. Among them are the vodka brand Smirnoff, Tresemmé, a line of shampoo and conditioner called Beauty-Full Volume, and the luxury fashion brand Coach. She has also starred in commercials for Target, Vita Coco, and others.