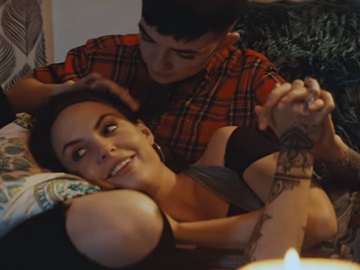 McCain UK celebrates all kinds of love in its newest advert, which also marks a new campaign, called “Here’s To Love”, which debuted on TV February 9.

“When it comes to love, what’s normal? Normal isn’t normal. Love doesn’t care about gender, where you’re from, or what others may think. It won’t judge you on ability or so-called disability. It won’t age, fade, or hold a grudge when you mess up or burn the burger buns. Love will stand by you, sit beside you, cross-legged on the couch with you, sharing plates, private jokes, and comfortable silences. Here’s to every kind of love and every kind of special night in!”, the voiceover says on the 60-second spot created by adam&eveDDB, which features eight real-life couples, including lesbian dancers Kimberly and Molly and Andy and Tara, who won a gold medal at the Paralympics and is a disability rights campaigner. Throughout the ad, the couples, also spanning mixed races and significant age differences, are seen enjoying their days and evenings together and having McCain products for lunch or dinner, alongside other dishes.

The last campaign of the frozen food company, intended “to shine a light on and celebrate families of all shapes and sizes… and celebrate the diversity of UK families”, also starred a gay couple who were subject to vicious comments on social media after appearing in the ad with their 19-month-old son.