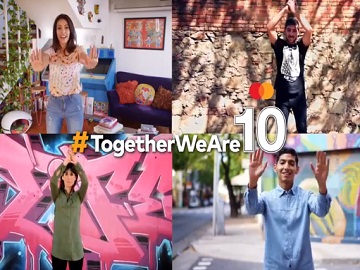 Mastercard encourages people to “Start Something Priceless” in its latest ad, highlighting that Mastercard will donate ten meals to children in Latin America and the Caribbean for every donation to the United Nations World Food Programme made on Mastercard card.

The spot, inviting viewers to join Mastercard, Messi and Neymar to “score against hunger”, opens with portraits of Latin American kids, while the voiceover explains that “millions of children in Latin America and the Caribbean are happy with just two things: friends and football, but there is something that gets in the way – hunger.” “That’s why Mastercard brought together two friends – Messi and Neymar Jr. – to help us fight it. Join us. Donate to United Nations World Food Programme and share a video with our special gesture using the hashtag #TogetherWeAre10. We will donate ten meals for every donation made with Mastercard,” the voiceover says, adding the tagline “Start Something Priceless”. Viewers are directed to the dedicated section on Mastercard website for more information.

The video with the special celebration gesture can also be posted with the hashtag #JuntosSomos10 on Twitter and Instagram, so that Mastercard would donate the value of one school meal. From April 10 to July 31 2018, Mastercard will also donate to the United Nations World Food Programme the value of ten school meals (US$2.50) for every donation made to WFP using a Mastercard at WFP’s campaign site, up to a maximum of 600,000 school meals for these two initiatives. Donations will support WFP school meals programs greatest needs in Latin America and the Caribbean.

The United Nations World Food Programme, the world’s largest humanitarian agency fighting hunger, works around to assist some 80 million people in more than 80 countries. The decision to offer school meals was based on the fact that, every day, countless children across the globe go to school on an empty stomach, which makes it hard to focus on lessons, and that school meals “improve a child’s nutrition, health and development, and they encourage regular school attendance,” giving a better chance, especially to those who are most disadvantaged, to achieve their full potentials.

Messi and Neymar are not the first to team up with Mastercard for this campaign. Famed Brazilian soccer player Pelé has also teamed up with Mastercard to “celebrate the unifying power of football and the moments that have Started Something Priceless in the history of the world’s premier club competition”.