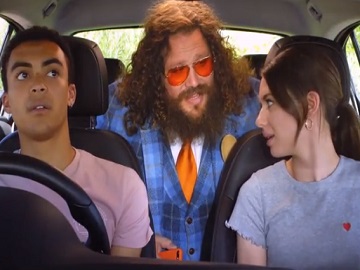 Released with the tagline “Freedom Tastes Sweet,” the spot opens with a young woman getting into her friend’s car after passing her driving test. Congratulated for her success, she reveals she’s worried about her insurance, which makes Mr. Marmalade show up in the back seat of the car and say “Sounds like you guys could use a little Marmalade.

We only insure young drivers.” He then hands her a smartphone for her to see the Marmalade mobile app and adds “With Marmalade freedom tastes sweet.” As he says that, he has a mouthful of marmalade from a wooden spoon.

Mr Marmalade is the brand’s first-ever, distinctive character. Described as “a fun, empowering and almost magical figure,” he is expected to appeal to both young drivers and their parents.

The “Freedom Tastes Sweet” campaign debuted on TV on 30 July, with the spot airing during the first advert break of the live final of ITV2’s show Love Island. The ad, which is complemented by out of home posters and social media activity, will also air in the commercial breaks of youth TV shows including Tattoo Fixers, Celebability, and Keith Lemon’s new show Coming in America, across the summer months.