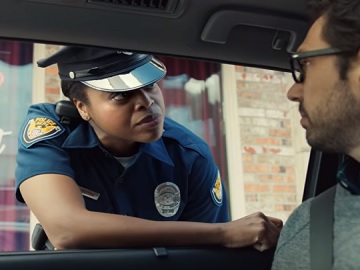 Lyft has released a hilarious new commercial, highlighting that, if you take a Lyft ride instead of driving, you’ll be saying “Yes” to so much more.

The 60-second spot opens with a man stuck in traffic who decides this is not a good day to drive his own car to work, so he goes in reverse up until his parking lot, at home, saying “Nope” to various scenarios he sees around him, such as a man shaving his beard while waiting for the cars in front of his to move, people waiting at gas station, and car salesmen. After taking his car back home and getting a Lyft ride instead, he starts to say “Yes” (“Yep” actually) much more. “Yep” to music, to the question if he closed the deal, and even to a police officer’s question if he had some drinks.

In a commercial released earlier this year, in June, the ride sharing app explains what ridesharing is, showing people how Lyft can get you a ride in minutes, wherever you’re headed. The spot highlights that “With Lyft you just tap to get wherever you want,” without worrying about parking spots, and that drivers, who are “dreamers, doers and heroes,” are screened with two different background checks.