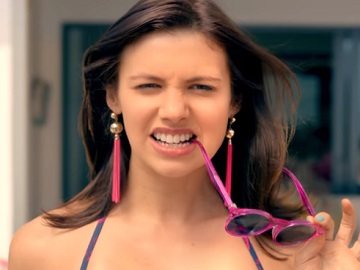 Lucozade Energy has launched a £6 million partnership with the british reality show Love Island, airing on ITV2, in an attempt to raise brand awareness.

An integrated campaign, including a TV advert for Lucozade Zero, social and digital media support, as well as in-store activations, kicked off on June 4, when the new series of the hit dating show premiered.

The spot, scored by a catchy dance tune, opens with a gorgeous young woman by the swimming pool flirting with a hunk who gets out of the pool. He has a great smile, a great body, but, as he walks away, she notices a tattoo on his back that makes her focus her attention on someone else. This time, the guy, who’s apparently very manly, starts showing off some unexpected dance moves. Eventually, the lady decides to go for the “new arrival”, an icy bottle of Lucozade Energy, which has “zero sugar, great taste,” and is 100% her type.

Launched in May 2016, Lucozade Zero is available in Original, Orange and Pink Lemonade. The brand will continue as a partner of Love Island throughout the entire new season, lasting for eight weeks.

Love Island’s premiere episode became the most watched programme at 9 pm, with an average of 2.95 million viewers. Hosted by Caroline Flack, the show aims for the 10 singletons introduced to the villa to find love in sun-drenched Majorca, with the couple voted the best winning £50,000 in the finale. Their relationships are put to the test as new contestants are brought over and twists and tricks are added.