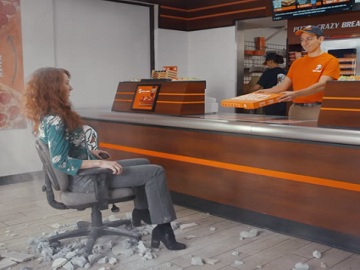 Dubbed “Sit Down”, the spot opens with Helen, a woman coming back in the office, for her lunch break, with a pizza box. When her coworker informs her that Little Caesars has the ExtraMostBestest for $6, she says she has to sit down, so she takes a seat. Learning that this pizza has “the most cheese and pepperoni for nation’s best price”, she says she has to “sit all the way down”, so she goes down through the floor/ceiling to Little Caesars from the ground floor to grab the ExtraMostBestest.

The commercial ends with the voiceover urging people to get the most cheese and the most pepperoni for the nation’s best price with Little Caesar’s large $6 ExtraMostBestest pizza.

The pizza chain informs that the claim of “Most Cheese & Most Pepperoni at the Nation’s Best Price” is based on comparison of Little Caesars ExtraMostBestest pizza and the other three national pizza chains large round standard menu 1-topping pepperoni pizza, sold at every day menu prices. The ExtraMostBestest pizza is available at participating locations. At the $6 price a tax is added.