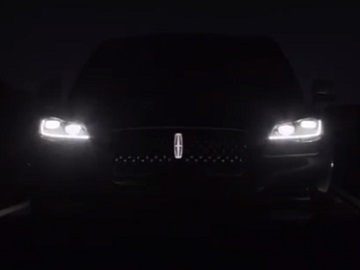 Lincoln announces the arrival of the 2020 Lincoln Aviator in a new commercial.

The spot features a pre-production model and informs that the estimated availability is set for late Summer 2019. Opening with the image of a lake, before the crack of dawn, the 30-second ad gives only a glimpse into the all-new SUV, which is driven down the road, through the dark night, by a man whose face is not shown and who has a young beautiful woman in the passenger’s seat, next to him. The exterior design is now showcased well, viewers getting to see only the unique front grille with the brand’s Star logo.

The seven-passenger, three row SUV represents “a true departure,” according to the automaker, which states that the car’s “captivating exterior design lines and interior roominess give rise to the feeling of flight and a sensation that both soothes and excites”.

The Lincoln Aviator offers two powertrain options: the Reserve Model’s 3.0L Twin-Turbocharged engine, estimated to create 450-horsepower, and the Grand Touring Model, featuring a chargeable Nano electric motor that works in tandem with the Twin-Turbocharged engine and is estimated to produce 470-horsepower. The Grand Touring Model, which marks the first chargeable hybrid from Lincoln, has, in addition to the 6 standard Lincoln Drive Modes, two additional modes: “Pure EV” for a quiet all-electric drive and “Preserve EV,” which assists in extending the range of the electric motor.

In terms of safety technologies, the all-new Aviator features Lincoln Co-Pilot Plus, which bundles a number of driver assist technologies “aimed at reducing the stress of being behind the wheel.” A 360-degree camera, that keeps you aware of your surroundings when in reverse, Reverse Braking Assist, which helps bring the Lincoln Aviator to a stop when an obstacle goes unnoticed by the driver, Intelligent Adaptive Cruise Control with Automatic Emergency Breaking and Pre-Collision Assist, and traffic sign recognition are among the available technologies.