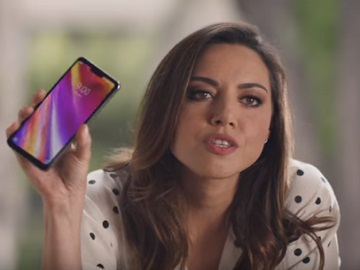 LG has tapped Aubrey Plaza to star in a new commercial promoting the LG G7 ThinQ with Google Assistant App.

The spot, released with the tagline “What’s It Gonna Take?”, opens with a guy named Ryan (played by Ryan Radis) complaning that his phone is slow. Advised by his girlfriend to get a new one, he refuses and admits that having a celebrity try to convince him “won’t hurt”. However, when Aubrey Plaza shows up at his window and tells him to switch to the LG G7 ThinQ phone, he turns down her proposal, saying he’s good. “What’s gonna take for you to switch?” his girlfriend asks. He doesn’t get the chance to reply, because Aubrey is breaking through the wall, willing to know the answer, too. “Seriously, Ryan, what do you need? A selfie?” she asks and then, learning that he would want a selfie, asks Google to take a selfie. Finally, the tagline “What’s It Gonna Take?” flashes across the screen.

Announced in May 2018, the LG G7 ThinQ features a Top Notch Display, an AI camera, that prompts you with 4 filter options, adjusting the exposure, shutter speed, and more, to help enhance your shot, a secondary rear camera with Super Bright Camera Mode and Super Wide Angle, a headphone jack, Super Far Field Voice Recognition, which means your Google Assistant is always there to help and will respond with real-time support from anywhere in the room.

The LG G7 ThinQ is available for purchase at Sprint, T-Mobile, US Cellular, Verizon, Amazon, Best Buy and B&H.