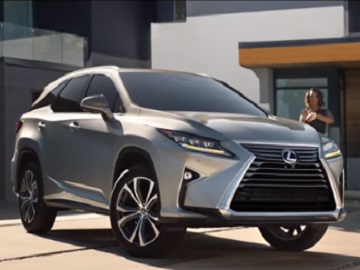 Lexus showcases the 2018 Lexus RX L in a new commercial, focused on the car’s third-row seating, which enables you to go places, but not go alone.

“Look at you. The world is your oyster. You’re going places, but you’re not going alone,” the voiceover says at the beginning of the 30-second spot, which features a woman at the wheel of a RX, joined by her son and her husband. The new Lexus RX 350L and RX 450hL, with third row seating, are then introduced. “There’s room for your dreams and your favorite people,” the voiceover adds, urging you to experience the new members of the Lexus RX family, and saying, at the end of the spot, the brand’s tagline, “Experience Amazing”.

Announced at the Los Angeles Auto Show in November 2017, the 2018 Lexus RX L (the RX 350L and 450hL models) marks the introduction by the luxury vehicle brand of “the modern three-row SUV that luxury buyers want”, according to Consumers Report. The first-ever seven-passenger RX 350L, featuring “refined styling, comfort and a newly appointed interior”, with power-folding seats and dedicated climate control, has a msrp starting at $47,670 with FWD and $49.070 with AWD, and the powerful hybrid RX 450hL, which delivers, according to the automaker, “the same uncompromised styling and instant torque you’d expect, now with even more space for the unexpected”, has a msrp starting at $50,620 with AWD.