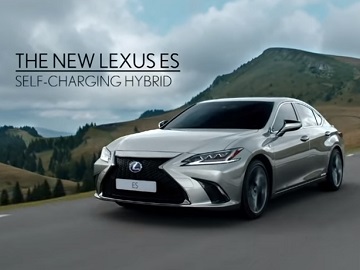 Lexus UK showcases the Lexus ES300h, in a new ad, which was – according to the automaker – written entirely by artificial intelligence (AI).

The 60-second film, directed by Kevin Macdonald, whose credits include The Last King of Scotland, the Whitney Houston biopic Whitney and the Oscar-winning documentary One Day in September, opens with an engineer who makes the final inspection of a Lexus ES300h. The man watches, overwhelmed by emotions and on the verge of tears as the car hits the road and, later on, watches on TV how the same car “behaves” during a crash test. Seeing that it stops when necessary, avoiding the collision with a truck, the man sighs with relief and celebrates the achievement with his teenage daughter, who is witnessing the event with the same curiosity and tension.

“The new Lexus – Driven by Intuition” onscreen lines read at the end of the advert, which – according to the automaker, “movingly demonstrates the powerful engineering and design that make the new Lexus ES the most intuitive model to date”.

The new Lexus ES300h, powered by a new self-charging hybrid system, comes equipped with the Lexus Safety System+, which is designed to support driver awareness, decision-making, and vehicle operation over a wide range of speeds and conditions.

Lexus revealed that its “creative agency, The&Partnership, collaborated with technical partner Visual Voice to create the AI scriptwriter, using IBM Watson to analyse a range of external audio, text and visual data and extract insight on what makes content award-worthy.” The process of creating the script of the TV commercial began by integrating various third-party Artificial Intelligence Visual Recognition tools into the Visual Voice AI platform and using this process to examine the automotive adverts that have won prestigious Cannes Lions international awards for creativity in the past 15 years. Raw data collected around emotional human responses to these adverts have been subsequently turned into categories and, from the data, the AI formed the ability to attempt to “turn on” different emotions within a viewing human. Lexus has also commissioned a study in collaboration with MindX – an applied science division of the University of New South Wales, Australia – to examine the preferences of intuitive individuals for aspects of car adverts.