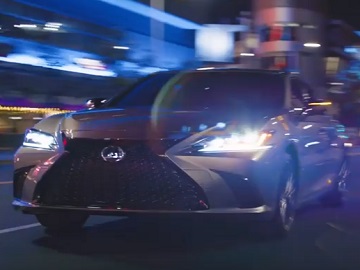 Lexus showcases the 2019 Lexus ES 350 F SPORT in a new TV commercial with a twist.

The 30-second ad, titled “First Date,” features a man taking a woman to a first date. During the car ride, while driving the new Lexus ES 350 F Sport through the city streets, at night, he encourages her to relax, telling her she’s going to love Sam. He then asks Alexa to play his Date Night Playlist, which she does, helping the woman to stay chill and forget about her worries. The Mark Levinson Pureplay audio system, which is, according to the brand, “a world’s first in an automobile,” being specifically crafted for the ES interior to create an unparalleled audio experience, is also shown.

“When every detail is a product of mastery, our drive for excellence is unstoppable, allowing us to reach new levels of sophistication and raise the world’s standards along the way, ” the voiceover says at the end of the spot, introducing then the first-ever Lexus ES 350 S SPORT, which was “crafted to elevate”. Finally, when the woman gets to meet her date, it turns out Sam is actually a woman.

The ad specifies that the Lexus+Alexa app requires an Android smartphone running version 5.0 and above, and also informs that Apple iOS will be available early 2019.

The first-ever ES F SPORT boasts an available Adaptive Variable Suspension system with Sport S+ mode, exclusive bolstered sport seats, and 19-inch wheels, the largest ever on an ES. The automaker also provides Lexus Enform, a connectivity suite offering a variety of benefits and services, from available onboard Wi-Fi and remote smartwatch functionality to concierge access and emergency assistance.