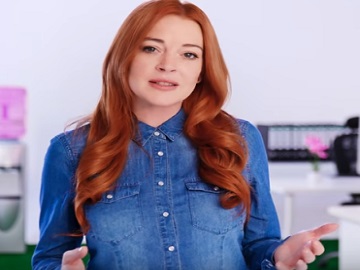 Just two years after getting off probation for the first time in eight years, Lindsay Lohan has announced that she is the new spokesperson for Lawyer.com. The actress pokes fun at her legal troubles from the past in a new commercial, released earlier this week, for the legal directory.

“When ‘Lawyer.com’ first reached out to me, um, I was confused and a little scared, because I thought I was in trouble. But when they asked me to be their spokesperson, I was intrigued,” Lohan reveals in a spot raising the question “Why did Lindsay Lohan join Lawyer.com?” “After meeting with the team, I realized ‘Lawyer.com’ is just about helping people. From getting a DUI…” she adds, making then a parenthesis, saying “let’s not pretend like I didn’t get one, or two, or three or some others…” She then continues her speech by mentioning that “it’s so simple and free.” “All you have to do is go online or give us a call. So let’s get started! Because at ‘Lawyer.com’, we’re always here for you!” she says at the end of the spot.

The actress, who says, in another spot, dedicated to finding a lawyer, that “Finding a lawyer is a real pain”, informs that “Lawyer.com’s matching service makes it easy.” “On the website, you’ll see a toll-free number and a form. For immediate help, call and talk to a matching expert. Or complete this easy form. Lawyers can start contacting you in a minute. So don’t worry, Lawyer.com will get the right lawyer working for you,” Lohan also says.

Since 2007, Lohan has been arrested for reckless driving, driving under the influence and shoplifting, and has been convicted in three cases. She has served time in jail, including two weeks of a 90 day sentence in 2010 for violating her probation, and she has also been sentenced to rehab numerous times for skipping court-ordered counseling sessions, failing drugs test or failing to perform her community service.

Lindsay Lohan, who is Lawyer.com’s exclusive spokesperson during the 12 month agreement they signed, will also act as their marketing and brand advisor, helping the team come up with new strategies to raise Lawyer.com’s awareness including producing compelling content, connecting to media leaders, and launching fun videos and commentaries to her followers on social media.