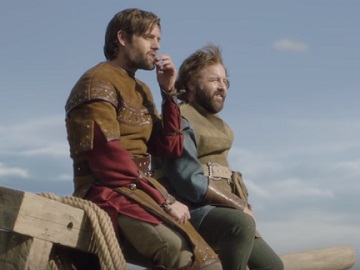 “Breaks are good. Have one!” this is the message conveyed by Kit Kat in one of its latest commercials, which urges people to take a Kit Kat break when building their own DIY furniture goes bad.

The spot, which is a lighthearted take on the frustration one feels when dealing with flatpack furniture instructions, features two warriors in a medieval setting trying to assemble a catapult. “It’s not the way it looks in the instructions, Harold,” one of them tells his fellow, who’s working on putting the pieces together. Finally, Harold decides to take a break and have a KitKat.

“Breaks are good. Have a break! Have a Kit Kat!” the voiceover says at the end of the commercial.

This installment is actually a short version of a commercial from KitKat Australia and New Zealand, created by the advertising agency J. Walter Thompson, Sydney, directed by Trevor Clarence, and produced by Revolver/Will O’Rourke, which introduced the “Snap Out of It” tagline.