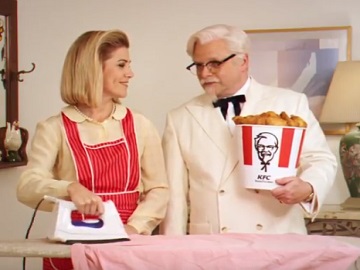 KFC has released a series of new ads to introduce its $20 Fill-Up Variety.

One of the spots, dubbed “What’s for Dinner?”, features a family of four being visited by Colonel Sanders, who comes in through their front door and brings them a $20 fill-up bucket. The family doesn’t want him to go, so he stays with them, playing games after dinner, helping the father in the garage by handing him a crispy strip while he’s fixing the car, handing out with their teenage daughter, bringing mom, while she’s ironing, a bucket full of crispy strips, and helping the youngest kid, a boy, to play baseball by throwing with crispy strips at him instead of using a ball.

Finally, it turns out this is the premise for a TV show created by The Colonel, who becomes your mom, your dad, the mailman, a neighbor, and even your couch. “No one loves families like KFC, so let the Colonel be your whole family,” a male voiceover sings at the end of the spot.

The Colonel has been portrayed by a number of other comedian since Darrell Hammond brought the founder back from the dead in May 2015. Norm Macdonald, John Olson, Matthew Eisman, Jim Gaffigan, Michael Loccisano, Jamie McCarthy, Jason LaVeris, and George Hamilton have all worn Colonel Sanders’s iconic white suit, black tie, and signature facial hair in KFC ads over the years.