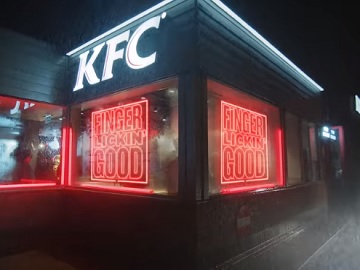 Colonel Sanders is back to UK TV in a blaze of herbs and spices to share words of wisdom and mark KFC’s return after the chicken shortage crisis.

The fast-food restaurant chain has released a TV ad created by Mother to celebrate the Colonel’s comeback, which is a symbol of KFC’s restored strength. News footage from restaurant closures due to what has been called as “chicken crisis”, archival clips of the brand icon and the Colonel making a dramatic entrance are the main “ingredients” of the latest spot, which features the Colonel’s own words about determination in the face of challenges: “My philosophy – don’t quit. Even in tough times, I’d always give the best there was in me. And you’ll always get the best in return.” He is also saying the catchphrase that became the chain’s tagline, “Finger Lickin’ Good”.