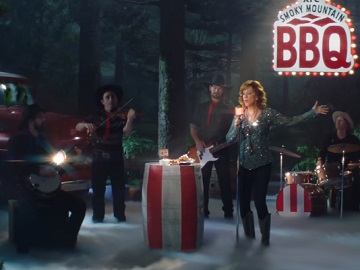 Reba McEntire stars as the latest incarnation of Colonel Sanders in a series of new commercials for KFC, becoming thus the first female celebrity playing the founder of the fried chicken chain.

One of the spots opens with McEntire singing on stage about KFC’s new Smoky Mountain BBQ on a country tune and then taking off her wig, revealing it was actually Colonel Sanders in disguise, in an attempt to sell the new BBQ chicken. “I thought if I dressed up like a country music legend, it would help KFC sell my delicious new smoky mountain BBQ.” – Colonel Harland Sanders, who’s wearing his famous white suit and black ties, but with a fringe on the back, ys, urging then viewers to try the tenders basket for just $4.99.

McEntire said she found the transformation “really fun”. “I’ve held a lot of roles in my life – sort of like the Colonel himself – but this is certainly the most unique one yet.” – she also said about her new role.

The spots starring the country music superstar will run until the end of April.

Colonel Sanders has been portrayed by several celebrities since 2015, including Ray Liotta, Rob Lowe and Norm McDonald, but McEntire is the first famous female celebrity and the first musician to do it.