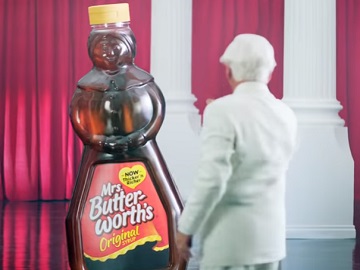 KFC says “Dance is the hidden language of the stomach” in one of its latest commercials, advertising the new limited-time Chicken and Waffles, served with a side of Mrs. Butterworth’s syrup.

The 30-second ad, that spoofs the famous dance scene from the end of the 1987 film “Dirty Dancing” (starring Jennifer Grey and Patrick Swayze in the leading roles), features Colonel Sanders, played this time by actor Craig Fleming, dancing with a giant syrup bottle of Mrs Butterworth, that is shaped like a person, to the tune of the iconic song “Time Of My Life”, performed by Bill Medley and Jennifer Warnes.

Done by creative agency Wieden & Kennedy Portland, the commercial presents the limited-time pairing as “the most delicious union of all time”.

The waffles now available at the fast-food restaurant chain are Belgian Liege-style waffles, which are sweeter and doughier than American-style waffles and are made with a yeast-raised dough instead of batter and include pearl sugar imported from Belgium, according to a press statement from KFC U.S. Head Chef, Bob Das.

Kentucky Fried Chicken & Waffles will be found on the menu until December 31, 2018. The price for meals that include fried chicken or tenders, waffles and a side of Mrs. Butterworth’s syrup starts at $5.49. The limited-time menu items consisting of waffles and chicken also include a $5.99 sandwich with two waffles in place of the bread and a Hot Honey fried chicken breast fillet.