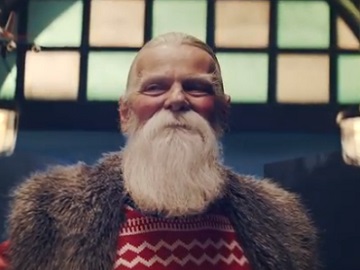 Kaufland markets itself as the official supplier of Santa in its Christmas commercial.

The film, created by the chain’s in-house advertising agency and directed by Los Pérez, opens with a white-haired, long-bearded man in red turning off the lights in Santa’s workshop and heading out to his sleigh. A notification makes him stop for a second and take a look at his smartphone. It’s the 24th of December and Mrs. Claus asks him if he organized the Christmas meal, nodding to a roasted turkey. The man gets into his vehicle and goes to Kaufland, where he stocks up on Santa action figures, Santa-shaped chocolate candies, fragrances, and more. At the cash register, several other white-haired, long-bearded men are queuing, but the protagonist, who’s handed his credit card from Noth Pole Bank, manages to avoid staying in line. Back at home, his family is seen waiting for him. His wife, who’s holding a bearded toddler, is showing him her watch, nodding at the time he returned.

The end of the commercial sees a variety of meal options and Santa’s father, probably, with tiny baubles in his long white beard, bursting into laughter.