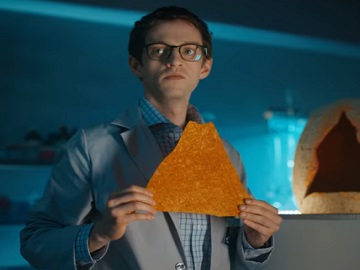 Doritos fans have a reason to be happy. The chips brand has unleashed Jurassic Doritos, which are huge chips in Nacho Cheese flavor, coming in an extremely limited edition dinosaur egg. A spot showcasing the Jurassic Doritos, part of a campaign launched in partnership with Universal Pictures’ to promote also the Jurassic World: Fallen Kingdom, has been dropped.

The 30-second commercial features Dr. Wu in his lab concluding he was right: “The Doritos and the dinosaur DNA have completely integrated.” Shortly after ending his sentence, a colleague puts his bag of Doritos in Nacho Cheese flavor aside and grabs a piece of the dinosaur egg which had just cracked. “Hey, what are you doing?” Wu asks him. Even though he was advised not to, Wu’s coworker can’t help but taste it.

“Try to get your claws on one at JurassicDoritos.com” an onscreen line reads at the end of the spot.

Those willing to get their hands on one of the Jurassic Doritos, which are limited to 100 pieces, can post a tweet to @Doritos containing the #JurassicDoritos and #Entry hashtags. Starting June 14, the brand will also organize an auction on JurassicDoritos.com, where you can bid on one of the Jurassic Doritos crates through June 21. All proceeds will be donated to help with disaster relief efforts for the American Red Cross chapter in Hawaii.