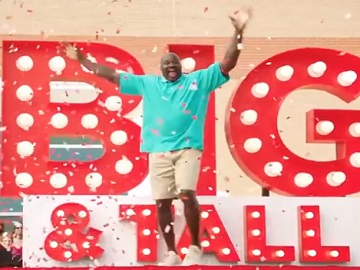 The former NBA star, who was appointed the new JCPenney men’s Big and Tall style ambassador, admits he likes Big Pockets and he cannot lie. Wearing T-shirts in which he can flex in, comfortable shorts, as well as an elegant shirt and suit, he shows off his singing skills, while revealing that “Things are looking bigger and taller, better than ever!”.

The ad also informs that, with men’s clothing sizes up to 6XL and 5XLT, you’ll have no problem finding something to fit your needs at JCPenney.

At the end of last month, the Legendary Los Angeles Lakers announced he will give people across the globe the chance to watch him as he embarks on the quest to open his new Las Vegas restaurant, Big Chicken, with the launch of the reality series “Big Chicken Shaq” on Facebook Watch. The eight-part show is set to follow Shaq as he pushes toward achieving one of his long-term goals. As part of the project, which is a collaboration with The Content Group and Asylum Entertainment, viewers will also have the chance to share their opinions on Facebook Watch and help Shaq make decisions as he races against the clock to open Big Chicken on time.

Big Chicken Shaq will debut this fall, and Big Chicken is scheduled to open sometime later this year. A few days ago, it was also announced that Shaquille O’Neal is opening a restaurant in the Staples Center area in LA, that might be called “Shaquille’s”.