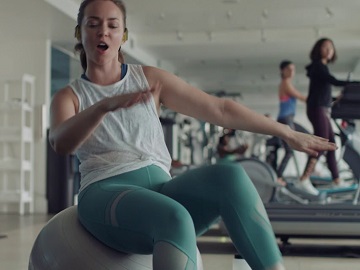 JBL has released a new funny commercial to advertise its Sport Headphones from the Endurance Series.

Titled “Balling,” the spot features opens with a young woman on a stage, performing the 2017 hit song “Rolex” by American sibling duo Ayo & Teo. As the video goes on, though, it turns out the girl is actually at the gym, listening to the respective track through her sport headphones while exercising on a gym ball. Her “concert” doesn’t seem to be highly appreciated by those around her, but this is not an obstacle in her way of feeling the music.

The commercial ends with the tagline “Original Pro Sound like you’re really there” flashing across the screen alongside the brand’s sport headphones.

In a previous commercial, the audio brand has shown several athletes as they use the Endurance headphones while doing different sports activities and highlighted some of the headphones key features, including the TwistBlock & FlexSoft Technology, MagHook, which ensures an easy management when not in use, PowerHook, which translates into Auto Power ON/OFF, FlipHook, which allows a customizable and secure fit, Touch Control, for easy management of calls and music, the 8 hours battery life and the 10 minutes speed charging option.

The respective ad also highlights that the Endurance series is IPX7 waterproof and “durable, no matter the elements,” IPX5 water-resistant and sweatproof, and that it has a built-in MP3 player with 1GB storage space, and that the headphones are designed for you to use them while running, sprinting, jumping, and diving.