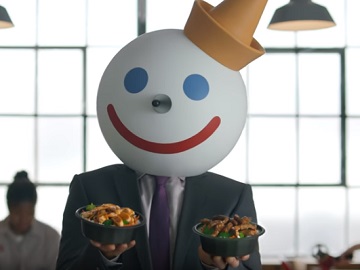 Jack in the Box advertises its Teriyaki Bowls in a new ad that sparked controversy.

The spot opens with Jack, the brand’s fictional CEO, walking through the headquarters and saying “While other burger places serve the same old stuff, I’m the only one with the bowls to serve something different. I mean, just look at my Teriyaki Bowls.” He then encourages viewers to choose from steak or chicken covered in Teriyaki sauce plus a choice of white or brown rice. At this point, an employee shows up asking for Jack’s opinion on his bowls, which leads to the latter complimenting him – “You got some pretty nice bowls there”. “And so does Dan,” Jack adds, referring to another colleague standing nearby. After a woman says “everyone’s gonna want to get their hands on Jack’s bowls,” viewers are given a glimpse into a meeting Jack was called due to his marketing approach. On a screen, he is seen ina truck personalized with the tagline “Try my bowls”, urging people to go try his bowls. An executive informs Jack that lawyers aren’t comfortable with the new marketing campaign. Surprised, Jack says people love his bowls, which makes his superior point out that this is exactly what he can’t say. Jack thus learns that he can’t say either “Try my bowls” and “Check out my bowls.” When he shows his billboard featuring the text “Enjoy my bowls”, the manager loses patience and words.

The commercial has come under fire for using the new bowls as a pun for a part of the male anatomy and being tone-deaf of the Me Too era.

Jack in the Box and the advertising agency responsible for the teriyaki bowl campaign, David & Goliath, have issued a joint press statement for CBS News, saying “As a brand known by its fans for its tongue-in-cheek, playful sense of humor, this ad is simply a creative and humorous expression around the teriyaki bowl product. It intends to highlight how a burger brand such as Jack in the Box dares to go beyond the usual fast food fare and serve something different”.