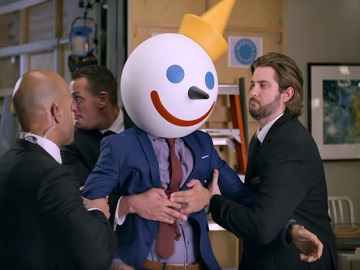 The 60-second spot opens with Stewart presenting, during an episode of show Martha Stewart Live, a bánh mì-inspired fried chicken sandwich that she made, telling viewers they would never find that at a fast-food restaurant and adding that “it’s a good thing”. Jack Box, who was watching the show from inside the television studio, enters the studio where she’s filming and saying he doesn’t think so in response to her statements. He then tells her his new food truck series has an Asian fried chicken sandwich, made with crispy fried chicken strips, crunchy Asian slaw, and Mayo, all on a toasted baguette, and that he would put it up against her sandwich any day. When she calls security to get him, the fast-food chain’s mascot starting aiming a jab at her: “What? Are you afraid somebody in the fast food world is gonna show you up?”. Ready to start a fight, Martha Stewart takes off her earrings, asking Jack if he wants to go to war with her, but the latter keeps taunting her: “What are you going to do? Tuck into bed? Read me a cookbook?”. At this point, Stewart tears off his nose and the show is interrupted due to “technical difficulties”.

After the break, Jack Box asks if she’s going to try his sandwich and, confronted with a refusal, he warns her he’ll go online, start the hashtag #JACKvsMARTHA, and urges her to get ready for a Twitter war.

Martha Stewart is only one of the many celebrities that star in Super Bowl commercials this year. Chris Elliott, Danny DeVito, Matt Damon, Tiffanny Haddish, Bill Hader, Alfonso Ribeiro, Keanu Reeves, Chris Pratt, Morgan Freeman, Peter Dinklage, Cindy Crawford, as well as Amazon’s CEO, Jeff Bezos, will appear on screen during the commercial breaks of the big game, taking place on February 4, at the U.S. Bank Stadium in Minneapolis, Minnesota and broadcast on NBC.