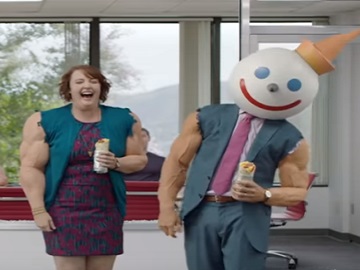 Titled “Bulkin’ Up,” the 30-second ad features the chain’s mascot, Jack, walking down an office and asking to the camera “Guess who’s bulking up your morning with some meaty breakfast burritos?” “This guy,” he says, showing off muscular arms and urging then viewers to get the Meat Lover’s Breakfast Burrito (which is loaded with ham, hickory smoked bacon, and grilled sausage) or Grande Sausage Breakfast Burrito (which is made with grilled sausage, crispy hash browns, and creamy sriracha sauce). While making his way among offices, smashing doors thanks to his unexpected power, he’s also mentioning that “at Jack in the Box we’re all about bulking up your breakfast”. Various other employees, including women, are also featured having the same muscular arms. A lady breaks her desk in two after hanging up the phone, the cleaning man holds the photocopying machine in one hand while vacuuming with the other, a window shatters when Jack and another woman, who’s eating a Meaty Burrito, give high five, and another guy is lifting a vending machine with one hand only.

After tearing the window to pieces, Jack “blames” the Mondays, which makes everyone burst into laughter.

The commercial ends with the voiceover encouraging viewers to bulk up their breakfast with the Meaty Burritos, part of the Meaty Breakfast Burritos family.