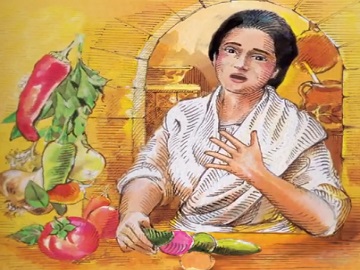 The 30-second spot opens with the woman on the Cholula Hot Sauce bottle addressing viewers and informing that, “for the first time ever, Cholula Hot Sauce is teaming up with Jack in the Box, America’s best….” She doesn’t get to end her sentence, though, because Jack grabs the bottle to spread some sauce on top of his Cholula Buttery Jack. “Jack, I’m trying to film this commercial!” she shouts at him, making him stop and allow her to continue. “As I was saying, the Cholula Buttery Jack has delicious Cholula Hot Sauce, crispy jalapeños and pepper jack cheese on a signature bun,” the woman adds, while on screen the aforementioned ingredients, along with the brand’s signature beef patty, are seen.

At this point, the fast-food chain’s mascot says this sauce would be good on fries, too, and doesn’t hesitate to top his Cholula Fries with more Cholula Hot Sauce. Infuriated, the woman asks him “What is wrong with you, Jack?”
The Cholula Buttery Jack, with a suggested price of $4.99, is made with a quarter pound beef patty, topped with melted garlic herb butter plus Cholula hot sauce, crispy jalapeños, tomatoes, green leaf lettuce, and pepper jack cheese, all on a signature bun. Cholula Fries consist of the brand’s crispy French fries topped with Cholula Hot Sauce and a garlic butter and white cheese sauce.

Both items will be available at participating locations nationwide for a limited time.