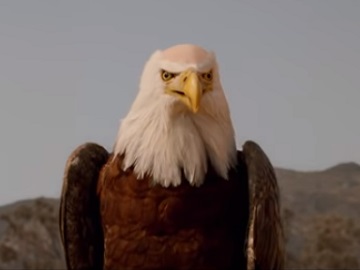 Jack in the Box is bringing back the All-American Ribeye Burger, made with 100% ribeye beef, and it spreads the news in a new commercial.

“America, land of blue jeans, muscle cars, bald eagles and burgers. And while muscle cars lost their muscle, blue jeans got all skinny on us, bald eagles got… well, balder, no way are we giving up on burgers,” Jack Box says, adding this is the reason why he created the All-American Ribeye Burger, made with “100% ribeye beef, fresh spring mix, and provolone cheese on a potato bun.” The bald(er) eagle, featured in the ad along with muscle cars that don’t start anymore and a man dressed in skinny jeans who says he can’t feel his legs anymore, is shown expressing his admiration for the Ribeye Burger, of which he says “it’s a good looking burger”.

The commercial ends with the voiceover saying that the Ribeye Burgers are back and urging viewers to try them today, including the new Blue Cheese & Bacon Burger, which will be available at participating locations for a limited-time only.