Home / Food & Drinks / IRN-BRU Don’t Be A Can’t, Be A Can Advert – Young Couple at Parents’ House 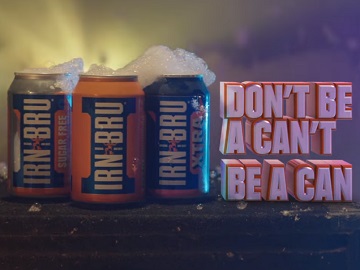 The 40-second spot, titled “Parents”, features a young couple visiting her parents. After an awkward silence, the girl’s father asks the guy when he is going to marry his daughter. Instead of giving him an answer, the girl’s boyfriend looks at her and says: “I don’t like him. Can we go?”. Trying to get out of the uncomfortable situation with a smile, she slaps his leg and tells him that they can’t leave in that exact moment. “Don’t be a can’t! You need a can,” he tells her, handing her a can of IRN-BRU. She’s seen taking a sip and the next shot features the two lovers in a disco, jumping in foam. Soon, the girl realizes her mother and her dog, Erik, are also there, dancing and having fun.

“Don’t be a Can’t! Be a Can!”, the voiceover says at the end of the spot, while on screen the range of IRN-BRU, including regular IRN-BRU, IRN-BRU XTRA, IRN-BRU Sugar Free, is showcased.

The brand announced that, from January 2018, IRN-BRU will contain approximately 50% less sugar (the amount of sugar per 100ml being reduced from 10.3g to 4.7g) and urged people to check the label given the fact that, for a time, old and new products may be on the shelf together.