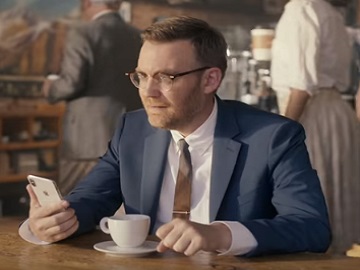 “Remembering your password doesn’t have to feel like a memory challenge.” this is the idea behind the latest iPhone X commercial, which highlights that, with Face ID on iPhone X, your face is your password.

The spot, titled “Memory,” features a man on a stage, in front of an audience applauding him, who must deal with a final memory challenge.

“This morning, you created an online banking password. What is it?” the game host asks him, making the spectators gasp. “Oh, dear, ok, it’s mine so I’ll remember it. I mean, I… it was today. I can… see it, just see it,” the contestant says, making afterwards several attempts. When people in the audience start mocking him, he loses concentration. He finally takes out his iPhone X and, thanks to the Face ID, he manages to access his e-mail address without inserting the password. As he raises his eyes and looks around, he realizes he’s in a coffee shop and quietly celebrates his “victory”.

“Your face is your password” an onscreen line reads at the end of the commercial, which is only the latest instalment in a series aimed at advertising some of the most important features of the iPhone X. Other spots focused on Animoji, the animated emoji icon feature available in the Messages app only for iPhone X, the new feature in Portrait mode, Portrait Lighting, which produces, according to the brand, “impressive studio‑quality lighting effects”, and other camera capabilities.

Apple’s flagship device, that marks the 10 year anniversary of the iPhone, also features an all‑new 5.8‑inch Super Retina screen, the “most durable glass ever in a smartphone, front and back”, and a suite of innovative technologies. Described as a “secure and private new way to unlock, authenticate, and pay,” Face ID is enabled by the TrueDepth camera and projects and analyzes more than 30,000 invisible dots to create a precise depth map of your face.