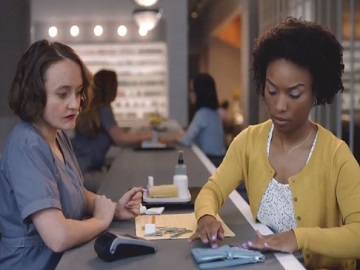 Interac Flash, Canada’s first contactless debit solution, is promoted in a new commercial, aimed at highlighting how easy it is to pay like this.

Titled “The polish & pay”, the 15-second spot features a woman who, after having her manicure done, takes the Interac Flash card out of her wallet by gently pushing it and, holding it carefully, brings it closer to the POS and pays, with no damage done to her recently polished nails.

“You can’t do that with cash, so use Interac Flash. All your money in one card,” the voiceover says at the end of the commercial, which also features the tagline “Own your world”.

Interac Flash allows users to pay for everyday purchases quickly, securely and conveniently by simply holding their Interac Flash-enabled bank card in front of the reader at checkout. They can use it at merchants across Canada, wherever the Interac Flash logo is shown.

When you hear a beep and/or “approved” message on the terminal it means your transaction is complete and your purchase was automatically debited from your bank account.