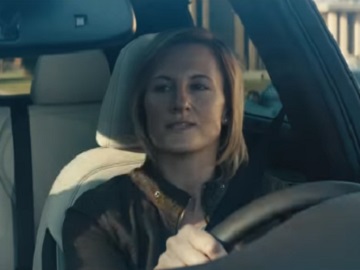 INFINITI presents, in a new commercial aimed at encouraging people to help beat cancer by playing the only bracket that fights back this March Madness, Melissa, a woman described as “a true Cinderella story”.

The 30-second spot, part of the company’s Hardwood Hero campaign, which features a team of cancer survivors set to face off against one another for INFINITI’s annual Hardwood Heroes game at the Final Four, opens with Melissa and her little daughter on a car ride, with a radio man talking about top Cinderella stories. “What’s a Cinderella story?” asks the girl, who is answered, later on, “I’m a Cinderella story.” Melissa’s voice is then heard recalling key moments of her life: “2013, diagnosed chronic myeloid leukemia. Five hours later, started chemo. June 2015, remission.” while on screen images of her working out and training for the Hardwood Heroes game are seen. “I’m a Cinderella story.” she tells her daughter. Her speech goes on: “One dog, two kids and a trampoline. Who doesn’t like a trampoline?” she asks.

The commercial ends with the voiceover urging people to take a timeout to fight cancer and play the INFINITI Round by Round bracket. INFINITI states that this is the only bracket that helps fight cancer and gives you a chance to win seats to the Final Four. For every correct pick in the 2018 CBSSports.com Round by Round Brackets Challenge, taking place starting March 15, 2018, through April 2, 2019, the automaker will donate to the charity Coaches vs. Cancer a minimum donation of $100,000 and up to a maximum of $700,000, based on the correct picks made by the participants, who must be legal residents of the U.S., Puerto Rico, or Canada (excluding Quebec) and at least 18 or age of majority, at the date of entry.