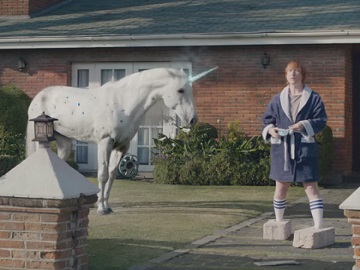 The spot features a guy wearing concrete blocks instead of shoes in front of his house, where he goes to pick up the newspaper in the morning. He takes out a pack of Ice Breakers gum from the pocket of the bathrobe he’s donning and discovers that he can take the Ice Breakers Ice Cubes, which now comes in a pocket pack, anywhere. When he starts chewing an ice cube, a unicorn shows up out of nowhere and blasts aways the concrete blocks.

This is not the only commercial the unicorn makes an appearance. Another spot, dubbed “Text”, features a woman riding the unicorn and entering the living room of her love interest through the wall after receiving a text message from him, asking her “What u doing?”.