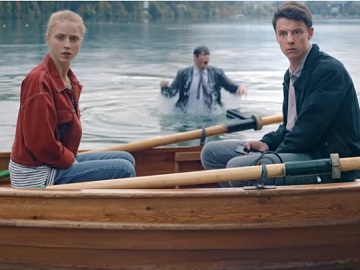 ibis Switzerland has come up with a new service to relieve you from the stress of posting on social media while you’re staying in one of its hotels. The hotel has also released a commercial aimed at illustrating how easy your life will become once the “task” of keeping your social media pages up to date will be given to someone else.

The spot features a young couple on a boat, with the guy taking a photo of his girlfriend and trying to post in on social media. At this point, several persons start to emerge from underwater and shout all kinds of things – from the hashtags he should use to reactions to the setting and photo. The guy’s ex-girlfriend is also there, approaching him: “You’re here with her. Is this the new me? How could you? I’m following you right now” she lets him know, ruining his mood. Everything changes as a man in a beige suite comes by and puts a hand on his shoulder.

All the voices keep quiet, waiting to see what happens. When the protagonist hands him his smartphone, the mysterious man takes a photo of the couple and then turns around and leaves, with the crowd following him.

The song playing at the end of the commercial is the 2013 single “What You Want” by the Belgian electropunk band Compact Disk Dummies, from their “Mess With Us” album.

“Relax we post” is a service providing ibis hotels guests, on request, with a social media sitter, that will look after their Instagram profile so that the latter could enjoy the city without a smartphone in front of the face. In the starting phase, 16 well-known influencers, including influencer icon Sylwina (55.000 followers), Sara Leutenegger (former candidate of Germany’s Next Top Model, 106.000 followers) and the lifestyle blogger Cristina Gheiceanu (144.000 followers) take over the job of the Instagram Sitters.

“Relax we post” will be launched from next weekend, exclusively in Zurich and Geneva, for a one-month trial period.