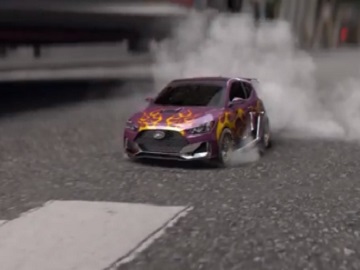 Hyundai highlights, in a new commercial, that its reborn 2019 Veloster is here, ready to make some noise, and invites people to see it in Marvel Studios’ Ant-Man and The Wasp, in theaters July 6th.

The 30-second spot opens with a red 2019 Hyundai Veloster stopping at a stoplight by a police car. Hearing the car accelerate before the traffic light turns green, the police officers give the driver a meaningful look, which makes him look around, surprised by the noise, as well. Eventually, it turns out it was Ant-Man’s Veloster making the noise, just between the two cars.

The commercial ends with the voiceover introducing the 2019 Hyundai Veloster (mentioning that actual size may vary) and urging viewers to see it in the upcoming American superhero film Ant-Man and The Wasp, in theaters July 6th.

A sequel to 2015’s Ant-Man, Ant-Man and The Wasp is set between the events of Captain America: Civil War and Avengers: Infinity War and follows Scott Land/Ant-Man (Paul Rudd) as he teams up with Van Dyne as the new Wasp (Evangeline Lilly) and embarks on a mission to bring to light secrets from their past. Directed by Peyton Reed, the movie also stars Michael Peña, Bobby Cannavale, Walton Goggins, Judy Greer, Hannah John-Kamen, Michelle Pfeiffer, Laurence Fishburne, Michael Douglas, and others.

“Redesigned to break loose from the pack with a bold new look, inside and out. Reprogrammed with next-gen technology. This is the Veloster. Reborn for 2019.” this is the description made by the automaker for its new Veloster. Among the key features are 201-hp turbo, 7-speed Dualt Clutch Transmission, paddle shifters, multi-link rear suspension, MacPherson front struts, center-mounted exhaust, 18-inch alloy wheels, wireless device charging, and Head-up Display.