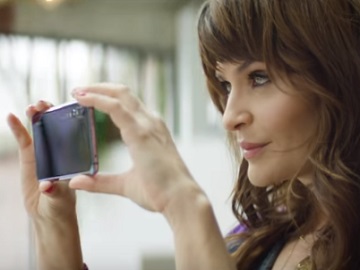 Huawei has teamed up with Helena Christensen to star in a commercial for the Huawei P20 Pro.

The Danish supermodel and photographer has used the Chinese company’s new flagship “intelligent” phone, which features “the world’s first triple-lens Leica camera”, to capture the portraits of three young women, active within the fields of aviation, jewelry design and dance. The entire photoshoot, titled “See More” based on the idea that the Huawei P20 Pro allows photographers and viewers alike to “see more” of subjects, was done with a cellular device, which marked the first time she did an actual photoshoot using a phone.

Jewellery designer Adeline Rapon is captured as she develops her designs, ballerina Melissa Chapski is immortalized as she’s trying to do the perfect pirouette, and international pilot Maria Fagerström is followed through the streets of a city, as she discovers new places.

“I’m so excited about shooting on this phone. Where I get to really work with the subject in a very intimate and personal way,” “Shooting on this phone, first of all, the technical side, is excellent. This camera is really amazing!” Helena Christensen said about the project and the Huawei P20 Pro.

Launched on Tuesday, 27 March, at the iconic Grand Palais in Paris, the Huawei P20 Pro boasts 40 MP Leica triple-lens with powerful proprietary innovation including object recognition and super slow-motion, the largest light sensor in a smartphone to allow in more light, resulting in a clear, focused image, and Night Mode.