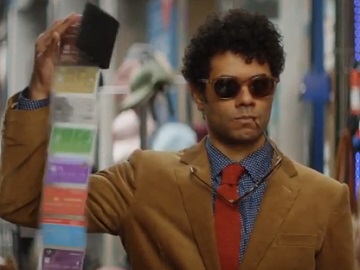 Richard Ayoade returns to the small screen in a new advert for HSBC UK, promoting the Joined-Up Banking feature within the Connected Money app from HSBC.

Channel 4’s The IT Crowd star is seen trying a new pair of sunglasses and then opening his wallet, showing the vendor his dozens of bankcards. “See your accounts from different banks together, with the Connected Money app.” a line reads at the end of the 10-second spot, before the tagline “Together We Thrive” flashes across the screen.

The ad also informs that, at the moment, the app is available to HSBC UK customers with Online Banking and an iPhone on iOS 10 or above.

The Joined-Up Banking feature enables users to see their UK current accounts, some savings accounts, credit cards, mortgages and loans together in one place, even if they’re with other providers. With the spend analysis feature, they can quickly search through their past transactions and learn more about their spending habits by monitoring what money they are spending by category, such as shopping or travel, and the similar transactions across different retailers and providers. In addition, customers are also helped to find out if they have enough in their HSBC current account until the payday with the Balance after bills feature. A new feature, called Round-Ups, which is aimed at helping customers save more by rounding up their purchases and send the money to their savings, will be coming soon, according to HSBC.

British actor, comedian, writer, director and television presenter Richard Ayoade first appeared in a HSBC ad in December 2017, when the bank launched its new marketing campaign, which introduced the strapline “Together We Thrive” and celebrated, in a 60-second spot from agency J. Walter Thompson London, titled “Global Citizen,” UK’s rich connections to the wider world, as well as the positive benefits that global influence and innovation has brought to the UK.