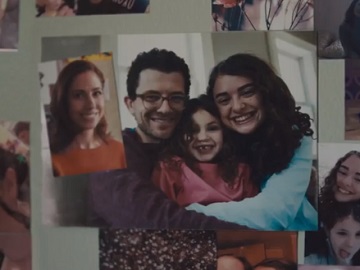 The 60-second spot, titled “Reinvent Connections”, tackles a kid’s struggle to accept the new life partner of her father. When the latter, who is a father of two girls, returns home with his girlfriend, his daughters go into their rooms without saying “hi”. Unwilling to accept that her mother is being replaced, the teenage girl builds a wall between her and her dad’s new partner. Over time, though, realizing that she is nice and makes her father happy, opens up her heart and, to express her feelings, snaps a photo of her stepmother, prints it with the HP Sprocket Photo Printer and glues it next to one of her, her younger sister and her dad.

The commercial ends with the onscreen line “sometimes, a picture shows love better than words” and with the woman seeing the photo on the girl’s wall and being overwhelmed with joy.

HP now offers, for a limited time only, a free $20 HP e-gift card with the purchase of select HP Sprocket Photo Printers. The deal excludes HP Sprocket 2-in-1 and HP Sprocket Plus. About the size of a cell phone, weighing around 6 ounces (170 grams), this portable printer goes anywhere and allows you to print photos directly from your smartphone or tablet as easily as you post them.

For Mother’s Day, the tech company provides a selection of gift ideas that include something for every mom, from fashionistas to tech savvy and gamers.