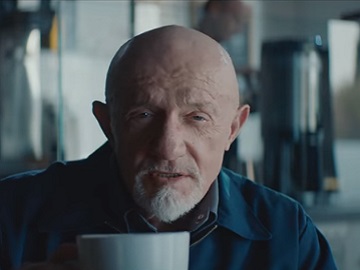 HP continues its security-focused campaign “The Wolf” with a series of new ads, starring Jonathan Banks, to promote the HP EliteBooks, described as “the world’s most secure and manageable PCs”.

The 71-year-old actor, known for his roles in the hit TV series Breaking Bad and its spin-off Better Call Saul, as well as films like Airplane!, 48 Hrs., and Beverly Hills Cop, plays The Fixer in the “Security as Defense for Cyber Attacks” series, presenting the solutions implemented by HP in terms of security.

Created by Giant Spoon and directed by Jake Schreier, the spot titled “Beth Gets It Done” opens with Banks saying that “the cyber wars are being fought on many different fronts, not just in places like this, where Beth here is upgrading all their machines to HP EliteBooks with Intel Core vPro processor, but also in places like this,” referring to a coffee shop, where he gets a coffee with a bear face drawn in foam. He then starts talking about a guy sitting at another table, who’s not there for lattés, but to take a peek over another man’s shoulder and steal whatever valuable information he can. “That may have worked in Math class, pal, but not here,” he tells the guy, mentioning that the EliteBook the other man is using, given to him by Beth, “comes with all of HP and Intel’s latest bells and whistles”, like multi-factor authentication and HP’s Shoreview, a feature that protects the visual hacking with the touch of a button. “Move along, buddy! Nothing to see here!” he says and then toasts to Beth, noting that now security at her firm is stronger than the fancy coffee he’s having.

The first two installments in “The Wold” series, from director Lance Acord, featured Christian Slater as an evil cyber hacker that hacked financial companies and a healthcare network.