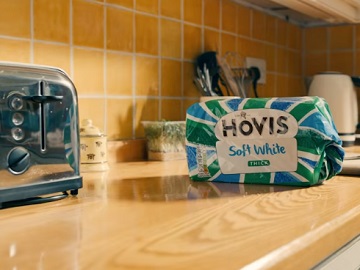 Hovis has launched a new advertising campaign, titled “It’s Just Bread”, to celebrate the role bread plays in people’s lives and highlight that Hovis is there in key life moments, becoming more than “just bread”.

The TV spot, which debuted on May 21, on ITV, during Coronation Street, features several persons of all ages handling a Hovis Soft White as they go about their day. The bread is presented as “just the thing that gets pushed in a bin, pulled and misshapen from the freezer and forgotten for a moment” in the toaster. However, it it also the thing that’s given to a baby girl “her first taste of independence”, then her second and her third. The baby girl is seen becoming a college girl and living alone, but still eating Hovis bread. A father is doing the midnight feed and eats a slice of Hovis to help him get through the night. A grandfather eating a marmelade sandwich in the back seat of a car, with his grandkids, is also seen.

“It’s just bread. Just always there and always good. From the first slice to the last. It’s just five letters. Hovis.” the voiceover says at the end of the advert, which is set to run across TV and VOD through June 10, 2018.