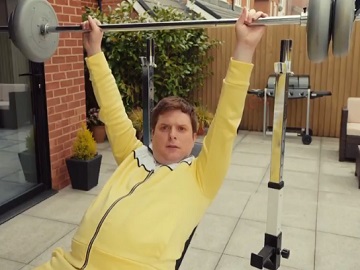 HouseSimple has released a hilarious new ad to promote its services. Titled “Derek”, the spot features a man bench pressing in his backyard and calling his neighbor, Derek, several times until he gets his attention to tell him that he just put his house up for sale through HouseSimple. When Derek aks if HouseSimple isn’t “one of those online estate agents that take your money even if the house doesn’t sell”, he is answered, by a middle-aged woman, this time, who’s bench pressing, that “you don’t have to pay them a penny till the house sells.” At this point, a man, who’s apparently the lady’s husband, adds “It’s super simple, Derek. So simple, that we’re your new neighbors!” “Who’s Derek?” asks the man beyond the fence, who it turns out is not Derek anymore, but the new owner of Derek’s home.

The company, which was voted “Online estate agent of the year 2018,” now offers the chance to all Dereks out there to sell their home with HouseSimple, in June, free of the selling fees, just because their name is Derek. The promotion, titled “You can sell your home FREE of our selling fees in June but only if your name is DEREK!”, started on May 9 and ends on June 30.