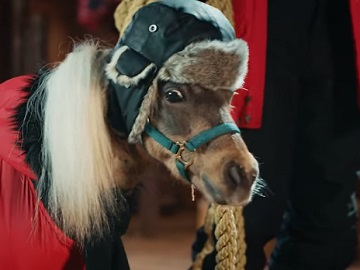 The spots opens with the goofy character saying Hotels.com rewards him basically everywhere. “So why am I hosting a dental convention after party in his Vegas suite? Or wearing a full-body wetsuit at this spa retreat? Or sliding into this ski lodge with my mini horse, Kevin?” he then asks, giving the answer himself: “Because Hotels.com lets me do me”.

The commercial ends with the voiceover saying the tagline “You do you and get rewarded”.

The Hotels.com embarrassment-proof pitchman is played by Brandon Moynihan. He first appeared in a Hotels.com ad in February 2014. The iconic character has been since then an advocate for the hotel booking portal, informing people about the Rewards program, while doing all kind of things. In an election year, he decided to join the presidential race, by actually running and campaigning with unique ads for all 50 states. The “Captain Obvious Runs for President”, which earned the reputation of “the most effective campaign in Hotels.com history”, saw Captain Obvious running on the campaign trail, featuring Hotels.com hotels as he went. To the UK market, he was introduced in May 2016 through a series of ads created by agency CP+B London.