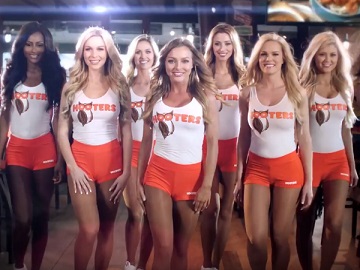 Hooters celebrates, in its latest commercial, pro race driver Chase Elliott and promotes its deal involving free food every time he places in a race.

“We’re for trading paint and the thrill of the playoffs. We’re for the infield, the Grand Slams. For the crew. We’re for smoked wings and ice-cold beer. We’re for Race Day,” various persons, including Chase Elliott himself, say on the 30-second spot, titled “Hooters is For Racing”.

A voiceover informs that “When Chase wins, you win: free fried pickles when he finishes in the top 10, and 10 free boneless wings with any 10-wing purchase when he comes in first”.

The “When Chase Wins, You Win” offers, only available in-store the Monday following a victorious race day, can be claimed by mentioning the offer to a Hooters Girl. Race fans can also join the Hooters9 Crew at hooters9.com and win with a coupon for $5 off a $25 purchase.

The casual dining establishment, with a deep history in NASCAR, became a primary sponsor of driver Chase Elliott and the No. 24 Chevrolet SS team in January 2017. Elliott, driving the No. 9 Hooters Chevrolet Camaro ZL1 for 12-time NASCAR Cup Series champions Hendrick Motorsports, will be sponsored by Hooters also this 2018 season for two races: the one taking place on July 7 at Daytona International Speedway and on Sept. 22 at Richmond Raceway.

Elliott is a second-generation NASCAR champion, having won the 2014 XFINITY Series title at just 18 years old. In 2016, he earned Cup Series rookie of the year honors after posting 10 top-five finishes, 17 top-10s and two pole positions, including the season-opening Daytona 500.