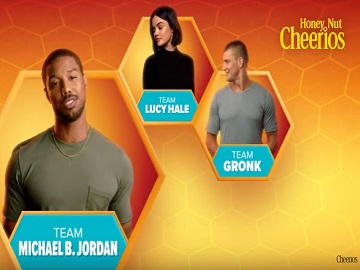 Cheerios has teamed up with Gronk, Lucy Hale and Michael B. Jordan to help raise money for their favorite charity and released a teaser video featuring the trio talk about the initiative, called Good Rewards.

The spot shows the Pretty Little Liars star, the Black Panther star and the New England Patriots tight end explaining briefly the Sweepstakes rules and encouraging viewers to join their team and do good with Honey Nut Cheerios.

Participants at Sweepstakes must first find a BUZZCOIN specially-marked box of Honey Nut Cheerios and join their favorite team. Team Lucy Hale supports cat and dogs through The American Society for the Prevention of Cruelty to Animals (ASPCA), Team Jordan supports hungry families through Feeding America and Team Rob Gronkowski youth sports through the Gronk Nation Youth Foundation. Once you have your BUZZCOIN ready, scan it and press the “Donate it to my team” button. This is the moment you can also unclock a prize, that may consist in a game, gift card, or other stuff. There is also a grand prize worth $10.000 for you + $10.000 for your charity. The same BUZZCOIN can be scanned up to three times a day for more chances to win.