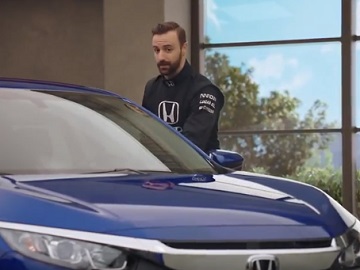 Honda promotes its Dream Garage Spring Event with a series of new ads, highlighting some of the great deals you could get on select models.

One of the spots features Honda IndyCar driver James Hinchcliffe, who fronts the ad campaign, informing viewers about the Honda Dream Garage Spring Event, happening now, and entering a showroom where several Honda products are on display. On his way, he presents a “brainy” lawn mower and, finally, gets in a 2018 Civic LX Sedan. “This is no ordinary Civic.” Hinchcliffe says, adding that it’s a Honda Civic with Sport Mode. “You know what’s in here that’s faster than Sport Mode?” he asks, revealing that he refers to his IndyCar.

The commercial ends with the voiceover saying the Honda Dream Garage Spring Event is on now and you could get a great deal on the Civic at kbb.com, Kelley Blue Book’s website. The deal, valid for well-qualified customers, involves paying a $189 lease per month for 36 months and $1999 due at lease signing. It includes down payment and excludes tax, title, license and dealer fees.