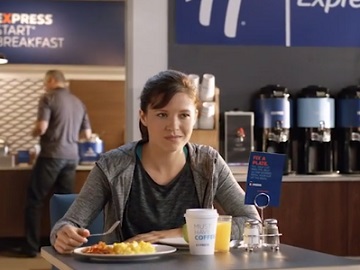 Mid-priced hotel chain Holiday Inn Express urges you to “Be The Readiest To Get A Jump On The Day” in its latest spot, which advertises the chain’s new hot fresh breakfast.

“Our new hot fresh breakfast will get you the readiest,” the voiceover says at the beginning of the 15-second advert featuring images of a young woman having breakfast at a Holiday Inn and in parallel training on heels to be able to catch the bouquet, which she does.

The ad also informs that you can save up to 15% by booking early at the hotel website.

Holiday Inn Express, which is the fastest growing hotel brand within the InterContinental Hotels Group family, has become over the years the first choice for thousands of travelers who need a simple, engaging place to rest, recharge and get a little work done. Its “Stay Smart” advertising campaign, with the theme “Be The Readiest,” from creative agency Ogilvy and Mather, includes a series of spots showing how people are on the top of their game when they are the “readiest.” Actor/comedian Rob Riggle, who has played a major role in elevating the Holiday Inn Express guest experience since he is a spokesperson for the hotel chain, starred in the campaign as “champion of the readiest”.