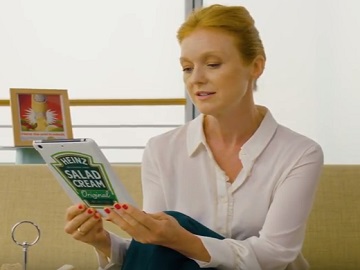 Heinz has released a new ad, revealing the final decision on the name of one of nation’s most iconic condiments, the brand’s Salad Cream, which was meant to become Sandwich Cream earlier this year.

The spot features a woman introduced as “Jenny Lettuce, Head of Feedback,” as she makes the announcement, referring to the feedback received from customers. “On the fifth of June 2018, we announced that we were thinking of renaming Heinz Salad Cream, one of the nation’s most loved and iconic condiments,” Mrs. Lettuce says at the beginning of her speech. She recalls the people’s reaction when the brand suggested Sandwich Cream and even reads out tweets posted with reference to this topic. While one of them said “Heinz are changing the name of Salad Cream to Sandwich Cream. It’s the apocalypse, I tell you! Madness!”, another one said “Just accidentally put #HeinzSandwichCream on my salad again. I keep forgetting it’s not Salad Cream anymore. Some went on my chips, too. Still not managed to get any in a sandwich, though”.

Mrs. Lettuce highlights they welcome and embrace all uses, even the more creative ones, revealing that this has been an essential part of her skincare routine for years. After mentioning other messages left by fans on social media, she says 87% of the participants at an independent survey said they wanted Heinz to stick with the Salad Cream and, finally, she leaves viewers with an insight from Barry, who tweeted “Sandwich Cream sounds weird. Say it out loud. It sounds weird”.

Eventually, the woman says Heinz cannot ignore the will of people anymore and that “Salad Cream is here to stay”.

The lines “You spoke. We listened. Thank you.” also flash across the screen at the end of the spot, along with the #SaladCream hashtag.