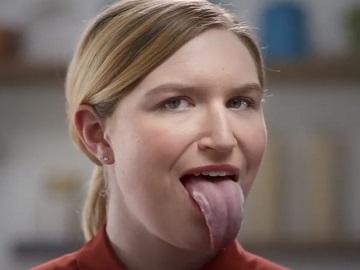 Heinz has run a [Seriously] Good taste test for its mayonnaise and released a spot featuring one of the testers.

The spot shows the tester no. 57, a blonde woman wearing a red shirt and a pair of jeans, taking a seat at the table and trying several dishes with Heinz mayonnaise. First, she’s having a sandwich, then fries and, as drops of mayo appear on her face, including her cheeks and nose, she spreads her tongue out of her mouth to lick them. Eventually, she wipes her face with a towel and, asked by a voiceover “So, what do you think?”, she smiles and nods.

“Has your tongue tasted it?” an onscreen line reads at the end of the advert, before the brand’s [Seriously] Good Mayonnaise is shown, as well.

Two weeks ago, the brand made an important announcement regarding its Salad Cream, which has been subjected to a name change, informing people that the initial name (Heinz Salad Cream) will be kept. The decision was made in response to fans’ reactions, many of them being against the renaming.