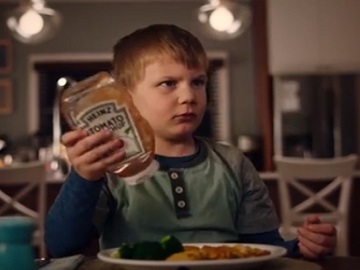 Heinz introduces, in its latest commercial, Jack Cambria, former NYPD Crisis Negotiator, who’s helping viewers with real tips on how to win at dinnertime negotiations, if you ever run out of Heinz Ketchup.

The spot, titled “Dinnertime Negotiations” and directed by Kenny Herzog, features Cambria, who has led the hostage negotiation team at NYPD for several years, sharing a few ways that could help diffuse the dinnertime crisis generated by running out of ketchup when a kid is eating chicken fingers. He suggests to validate the kid’s emotions, “open up an avenue of communicate” and show you’re ready to listen and, if none of these tactics work, “create a mutual enemy”, which translates, in this case, in blaming the other adult at the table (Mom, in the ad).

However, Cambria asks you to remember that “the best way to win this game is not to play it” and urges you to “always have a backup bottle of Heinz ketchup”.

In March, the brand had a limited-time deal, offering “Buy One Heinz, Get a Backup Free” coupons, which are available in aisle or on the ketchup bottles while supplies last at hundreds of retailers and stores including Walmart, Target, ShopRite, Safeway, Albertson’s, Kroger, County Market, Jay C Store, Superior Grocers, and many more. The offer is valid for a 30 – 38 oz. ketchup bottle up to $4.00. Heinz has also set up a hotline (1-844-HEINZ-11 / 1-844-434-6911) offering pro tips that can help you navigate some tough situations with kids.