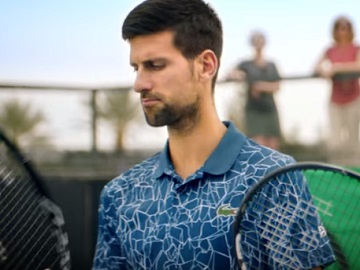 Novak Djokovic returns to the small screen in a new commercial for HEAD Tennis, pitching the new Graphene 360 Speed Racquet.

The 60-second spot opens with the German tennis player Alexander “Sascha” Zverev Jr. using the new HEAD Speed Racquet, which boasts advanced Graphene 360 technology and “offers incredible stability and enhanced energy transfer from racquet to ball” to hit a ball. Time apparently stops and a man shows up trying to tell viewers what they missed in case they blinked. He doesn’t get to finish the sentence, though, because Djokovic shows up and finishes it for him. The man then shows people what happened during that blink of an eye: “a falling object (a strawberry falling from a tray, more precisely) traveled almost one meter, the universe just expanded 15 kilometers, and a tennis ball launched from the only racquet in the world with Graphene 360 technology…” In the meantime, Djokovic takes advantage of every time the man blinks to do all kinds of funny things and mess with him – and others around there. He replaces the strawberry with an apple, replaces his scarf and takes him back to where he was. And, holding his own Graphene 360 Speed Racquet, says Zverev’s racquet is not “the only racquet in the world with Graphene 360 technology”.

HEAD also informs that, since the introduction of the Graphene technology in 2013, players with Graphene in their head racquets have won a “staggering number of prestigious tournaments”.

HEAD is celebrating the launch of its Graphene 360 Speed line by giving people the chance to get a free Graphene 360 Speed during its 2018 “Speed Wins – You Win” promotion. The first 1000 customers who purchase any Graphene 360 Speed racquet between July 6, 2018 and August 20, 2018, and register it on the official website until August 24, will receive a rebate of the purchase price paid for the promotion if Djokovic or Zverev wins the US Open final in New York, on Sunday, September 9, 2018.